The major purpose of activation function in neural networks is to introduce non-linearity between output and the input.

They basically decide when to fire a neuron and when to not. If we do not use activation fucntion, there will be a linear relationship between input and output variables and it would not be able to solve much complex problems as a linear relationship has some limitations. The main objective of introducing a activation function is to introduce non-linearity which should be able to solve complex problems such as Natural Language Processing, Classification, Recognition, Segmentation etc.

The figure below shows some of the very popular activation functions. 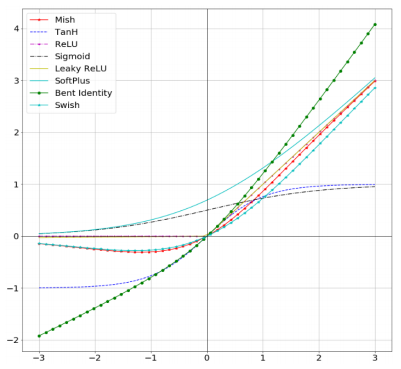 ReLU is rectified linear unit activation function. It is defined as for x > 0, 0 otherwise. 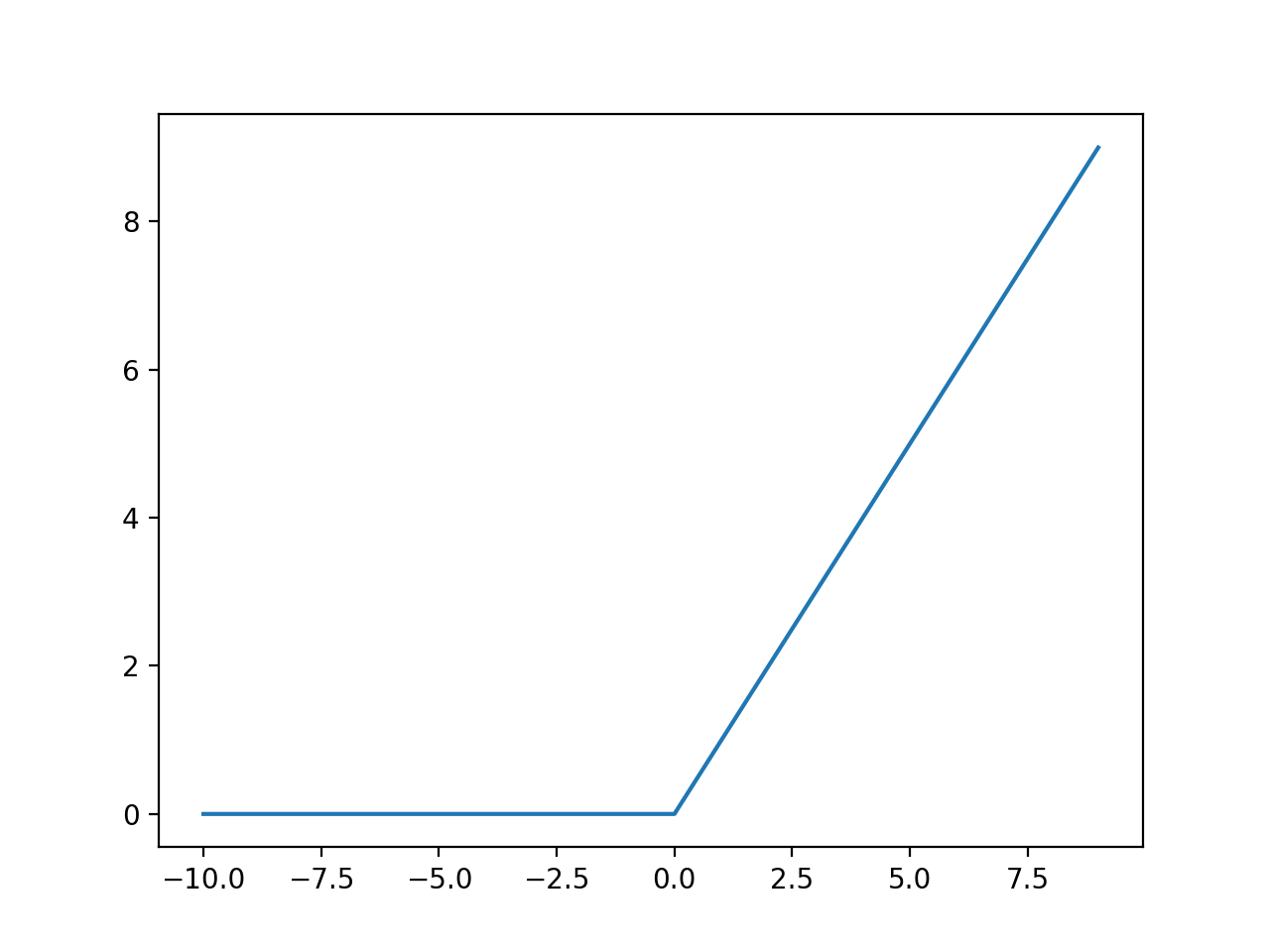 From the above figure we can see that ReLU has 0 gradient for all x < 0, it means that it would not activate all neurons at a time and very few neurons will be activated making it sparse and thus cost efficient and easy for computation.

It was discovered by the people of Google Brain in 2017. It is basically a gated version of sigmoid activation function.

The formula of swish is where

is either a constant or trainable parameter. When , swish becomes scaled linear function. When

, swish becomes ReLU function. The simple nature of swish and its resemblance with ReLU has made it popular and it has been replaced by ReLU in many neural networks. A simple replacement of ReLU by Swish suggests improvement in classification accuracy on ImageNet by 0.9 % and around 0.6% for Inception ResNet v2.

Like ReLU, Swish is unbounded above and bounded below. Swish is smooth and nonmonotonic. In fact, the non-monotonicity property of Swish makes it different from most common activation functions.

Now that we have completed understanding what Swish is let us move to Mish activation fucntion and see how it works!

Mish is also one of the recent activation networks and is given by the formula where . Most of the experiments suggest that Mish works better than ReLU, sigmoid and even Swish.

The following is the graph of Mish activation fucntion. 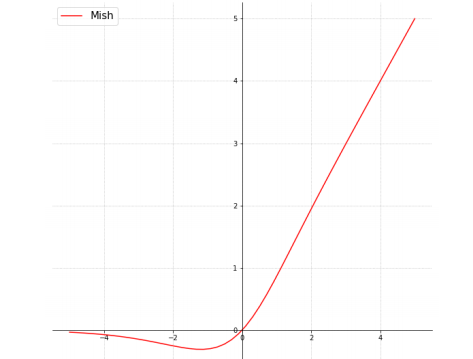 Like both Swish and Relu, Mish is bounded below and unbounded above and the range is nearly [-0.31,

Summary of Properties of Mish

The following table shows the summary of all the properties of Mish.

Comparsion between Swish And Mish

The figure below shows the comparison between the derivatives of the activation functions Mish and Swish. We study the nature of the graphs and some results about them. 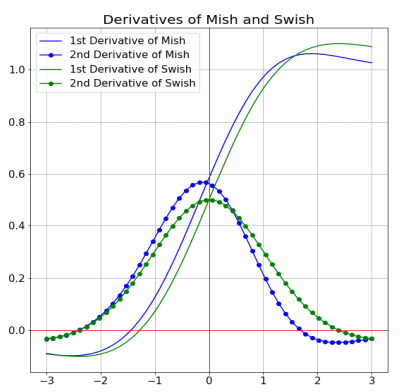 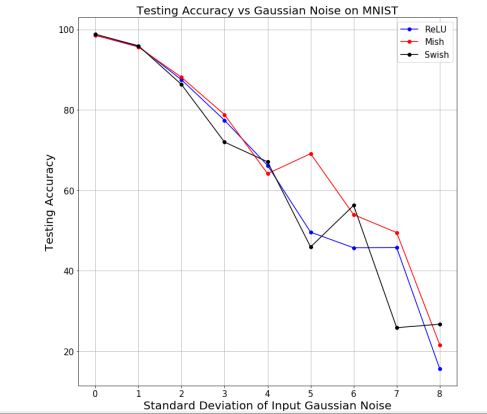 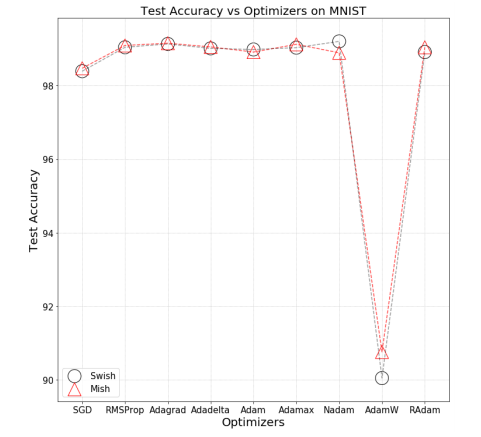 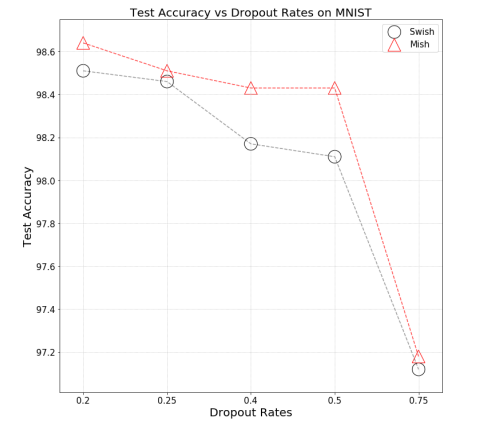 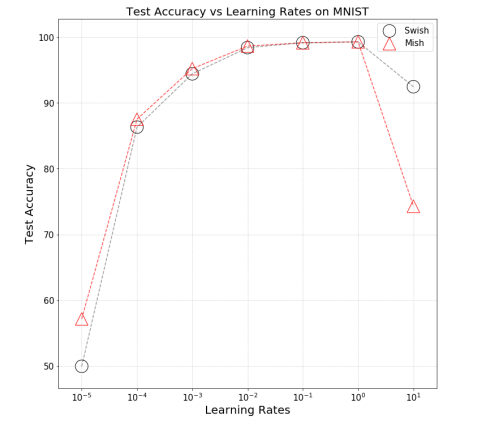 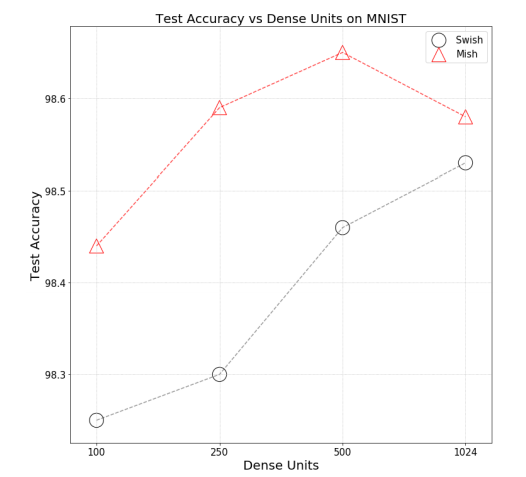 Mish and Swish in tensorflow and Pytorch